A prototype is a draft version of a product that allows you to explore your ideas and show the intention behind a feature or the overall design concept to users before investing time and money into development. A prototype can be anything from paper drawings (low-fidelity) to something that allows click-through of a few pieces of content to a fully functioning site (high-fidelity).

It is much cheaper to change a product early in the development process than to make change after you develop the site. Therefore, you should consider building prototypes early in the process. Prototyping allow you to gather feedback from users while you are still planning and designing your Web site.

has found that the biggest improvements in user experience come from gathering usability data as early as possible. He notes that it’s cheaper to make changes before any code has been written than to wait until after the implementation is complete.

The Difference between Sketches and Prototypes

Although the difference between sketches, wireframes, and prototypes isn’t always clear, there are differences in their intentions.  Bill Buxton, in his book Sketching User Experiences, provides a list of descriptors that help explain the differences:

by depicting the relationships between what the design is trying to communicate, the amount of iteration between phases, and the fidelity of the design. 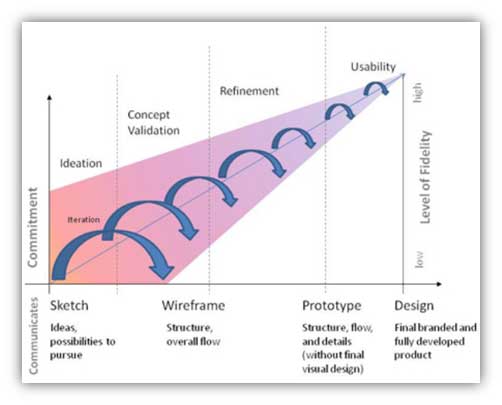 There is an on-going debate about using low versus high fidelity prototyping and how much a prototype should resemble the final version of your design.  Both have been found to be basically equivalent in finding usability issues (Walker et al 2002).  With that said, there are things to consider when trying to decide which option is best for your project:

Paper-based prototyping is the quickest way to get feedback on your preliminary site information architecture, design, and content. Paper prototypes are easy to create and require only paper, scissors and sticky notes.

Use one piece of paper for each Web page you create and then have users try them out in a usability test. Users indicate where they want to click to find the information and you change the page to show that screen. 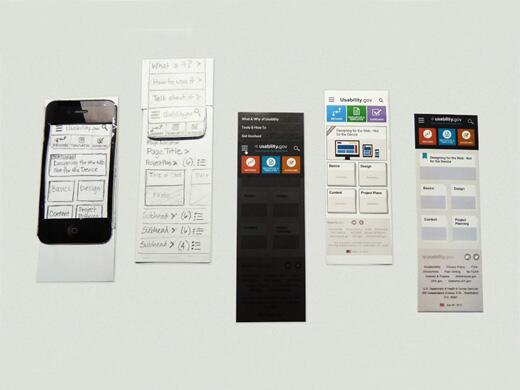 The process helps you to gather feedback early in the design process, make changes quickly, and improve your initial designs.